We were talking about Starlink, the constellation of satellites sent into space and operated by SpaceX. Did you know that the use cases are currently the subject of speculation? In reality, no one yet knows exactly what these satellites will be used for, and since nature abhors a vacuum… Following this publication, we received a theory that we wanted to answer.

Conspiracy theory about the Starlink network and possible lawsuits!

I received your ad in Tesla magazine regarding several topics including the starlink and how it could benefit the Tesla community.

Here’s what we can say about it:

The theory stated by this reader is based on two main points. On the one hand, that 5G would be responsible for the contamination of Covid-19. Second, that Starlink would require 5G to be effective.

We are going to discuss these two aspects, but first of all, a technical clarification is needed.

The growing need of populations for mobile communication has resulted in a gradual evolution of communication protocols. This evolution has made it possible to exponentially increase the data flow rate by using higher wave frequencies. The use of higher frequencies is at the expense of the range, which has been reduced from tens of kilometres to a few hundred metres. Therefore, the power required had to increase to allow transmission at higher frequencies while limiting the reduction in range.

5G is believed to be responsible for the contamination of Covid-19: false.

Although 5G uses a higher frequency band than previous mobile standards, this frequency band is still much lower than visible light and ionizing waves such as X-rays. (see computer graphics) 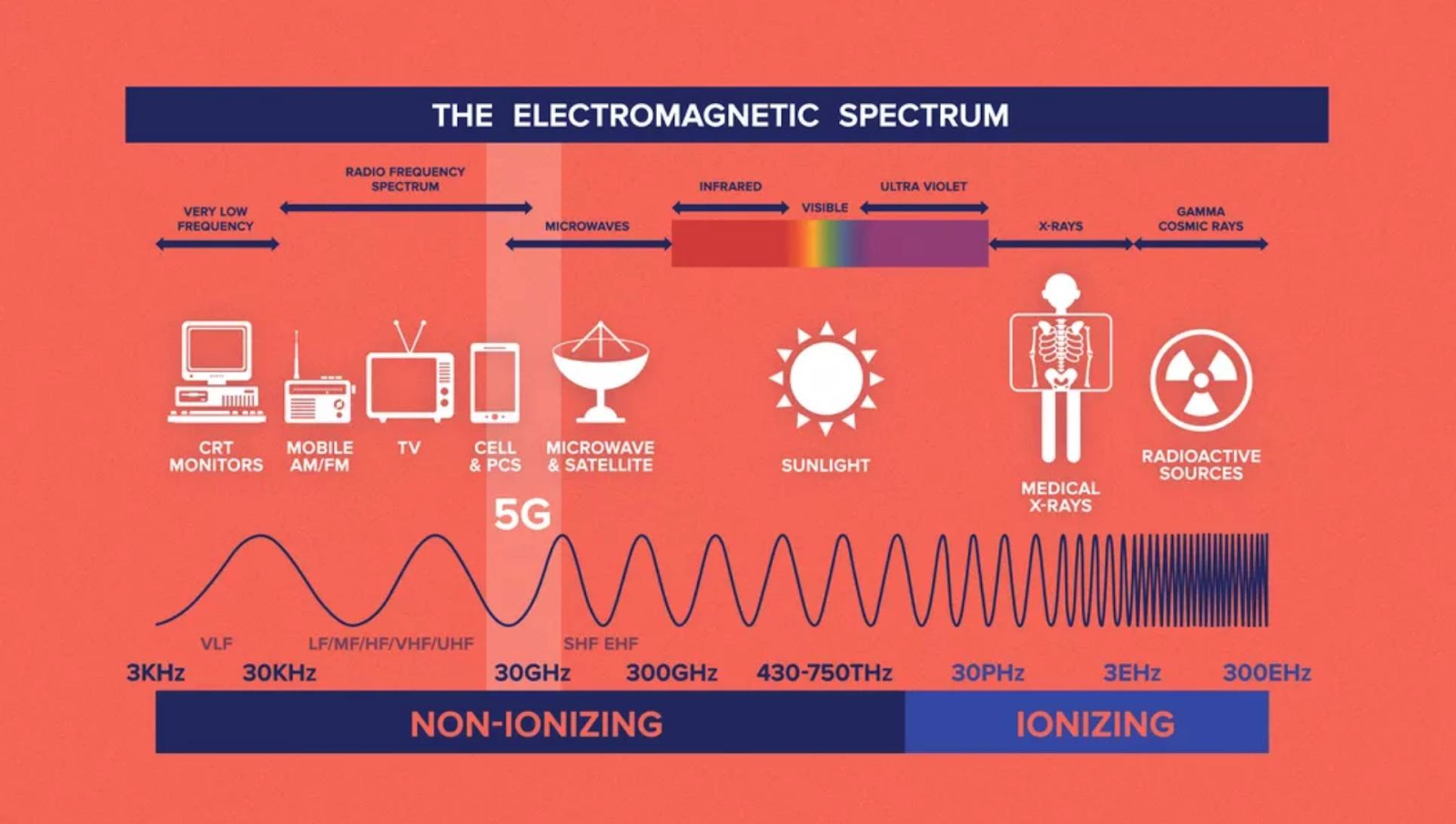 Like a microwave oven, a 5G telecom antenna could heat up what is in the immediate vicinity, but cannot spread a virus. See this BBC article: https://www.bbc.com/afrique/monde-52187409.

This is evidenced by the fact that the virus has spread rapidly in Iran, which has no 5G network at all.

Starlink would need 5G to be effective: false.

The Starlink network provides direct communication between a user antenna and a satellite in low earth orbit, without using the ground network infrastructure. This is precisely one of the advantages of Starlink: allowing homes, planes and boats without fixed/mobile network coverage to access broadband internet. 5G has nothing to do with Starlink.

The principle of Starlink is that a user points his Starlink antenna (flat, about 30-50cm in diameter) towards the sky. The satellites in low orbit move at a speed of about 20,000 km/h. The user antenna follows the satellite with its electron beam and maintains the connection. When another satellite approaches, the antenna points at the new satellite. This satellite change is done automatically every 2 minutes, as can be seen on https://satmap.space.

As can be seen, 5G is not present in the Starlink network infrastructure.

Mobile operators will certainly be free to carry data from Starlink-isolated 4G/5G antennas, but this does not affect Starlink’s operation as such.

As explained by Elon Musk, Starlink will provide internet to places with no coverage, such as homes in remote areas, boats and planes. A test has already been successfully completed on board a US Air Force C-12. (Reuters)

Starlink technology, on the other hand, will be unable to cover an entire city because the bandwidth is far too low, even when the constellation is complete. It will still be necessary to use ADSL, fibre optics, 4G/5G in the city to connect to the Internet.

On the subject of health, it is opportune to take an interest in Starlink user antennas that will be positioned on balconies or roofs of houses.

Starlink user antennas will be phased-array type. This type of antenna electronically directs its beam to the nearest satellite without mechanical movement of the antenna. It is a very efficient technology, with low power consumption and low losses, which prevents the transmitted power from being scattered out of the beam aimed at the sky. Assuming a transmission power of 50W and a 1% loss, less than 1W would be radiated around the antenna:t much less than the radiation from a wifi access point or microwave oven, which are located in the heart of the home.

There is another way of interpreting the theory stated at the beginning of the article, which is that the 5G tape used by Starlink to communicate this will be banned in the future. It is true that Starlink uses the Ku band (12 to 18GHz) today and Ka band tomorrow (24 to 40 GHz), which is the microwave range.

The difference with the 5G is that the user antenna only consumes a few tens of watts (maybe 100W maximum). Why is that? It is not a question of covering an entire neighborhood with a signal emitted at 360 degrees, but of a signal finely pointed towards the satellite. As explained above, a phased-array antenna is used and directs the beam electronically towards the moving satellite.

Existing satellite internet antennas that extend to 36,000km (geostationary) in two directions and over a comparable frequency band consume around 75W peak power. To transmit to Starlink at 500 km or even 12,000 km altitude, one can expect a lower power, or of the same order of magnitude if the bandwidth is higher.

Starlink does not appear to pose any health problems, and it seems unlikely that Starlink would be banned because of this.

YOU WANT TO KNOW MORE ABOUT OUR COMMUNITY?

This site uses Akismet to reduce spam. Learn how your comment data is processed.